Wilbert van Haneghem, purser for KLM Royal Dutch Airlines, proved three years ago that flight safety training, those annual recurrent and exams do come in useful when you need them the most. And not only on board your aircraft. Our training can come in handy in the strangest of situations. Even on a boat. On vacation. When you least expect it. 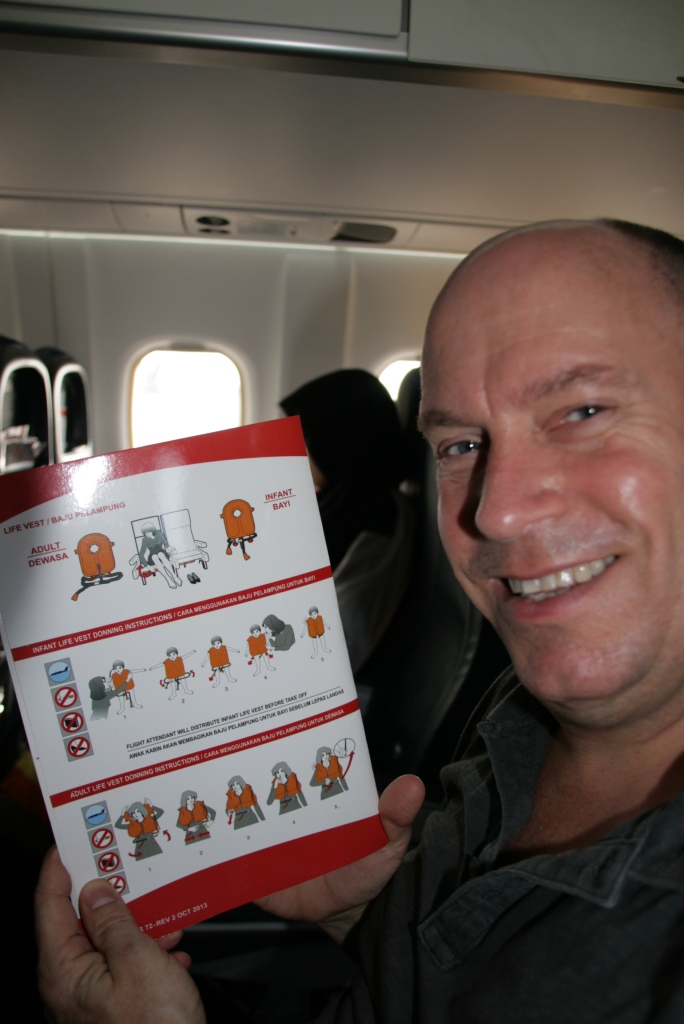 “The boat cannot sink, as it is made of wood”. Those words said by the guide/translator on board our tourist boat sailing in Indonesia still echo through my head, even though it is exactly three years ago today (August 16, 2013).

How can someone be so ignorant, when the boat IS actually sinking. We could all see and feel the water rising and splashing over the deck. I came out of the forward hold, which was filled with water up to my lips. I tasted diesel in my mouth and pumping the water out was no longer an option.

‘I explained the HELP- and huddle-positions’

Soon after his announcement, after trying to balance the 25-meter long wooden vessel somewhere on the open sea between Lombok and Komodo, panic struck. It was Saturday morning 1 am and the night was pitch black. The only light came from the stars and moon. Neither the captain, nor the other crew members were anywhere to be seen.

I looked at my fellow travellers who I had met the day before and thought, “Someone has to do something”. So I sat down on deck and started briefing the other 19 passengers, including my girlfriend. They came from Germany, England, Spain, Italy, France and New-Zealand. At least everyone understood English, what luck!

I explained the HELP- and huddle positions, how to remain warm and visible in the water. I handed out snorkelling equipment and we discussed which exits we should take which in our case were the open windows. In the end I checked my own exit, a door-opening as I was in a different position to the others; just like we as cabin staff have been trained for many years. The sense of calm that I was able to radiate helped to calm the people around me. My girlfriend and I said to each other: “Whatever happens, we will stick together”. Then a huge wave hit us.

The briefing paid off, because seconds later, when that wave thrust everybody into the sea, we were prepared. Of course we were very lucky that nobody got seriously injured – just a few inches to the left or right and there would have been broken limbs or necks.

All landed in the water, except for me. I was catapulted in to an aluminium sloop (boat) which could seat four – according to the factory placard. The sloop was exactly in front of my exit. Apparently, that was what the crew were doing, getting that sloop off the roof and putting it in the water. I could continue immediately with a headcount – everyone was there, nobody seriously injured. Also, thanks to my higher position in the sloop, I kept the leading position over the group.

‘The ship was now a danger’

Hours later, when we had been standing on the stern of the sinking ship, now laying in the water in a 45-degrees angle and nose-down, we discussed our options. We could see a volcanic island, but estimating how far it would be to swim was difficult. Some said eight kilometres, others 35. Anyhow, it would take us hours to reach it, if we would even make it in a rough sea with waves of over three meters, strong currents and very possibly sharks.

But the ship became a danger in itself. We got cuts from the breaking of wood, nails and screws, while the waves kept pounding through the sinking wreck. We had to swim.

It looked like a scene from a Hollywood movie. Only there were no special effects, no miracle plan, no big action hero to save the day. All we had was the sloop, big enough to squeeze a maximum of seven people, two planks as the crew had lit the paddles on fire and eight small pineapples that were floating around. This for 25 people.

We started swimming around 10 am. The group split up quickly, some swam faster than others and chose not to stay close to the sloop. Only now the crew told us honestly that there had been no alarm what so ever. There simply was no GPS, no radio, no flares and the life vests, some 43 years old, did not keep us afloat effectively.

‘Should we rescue them?’

The sloop was both a saviour as a nuisance, it slowed us down. We found out that the crew had eaten the pineapples without sharing. We were furious and arguments and fights soon broke out.

More people left the sloop, in the end only six of us remained. Soon we came near two other swimmers, who we rescued as they were exhausted. A while later we saw the crew members. They had swam in another direction and were surely in trouble. A short but fiery discussion was raised – they ate the food and did not participate in paddling, should we save them in the knowledge that it could bring us closer to death? But we couldn’t watch these people perish so we rescued them. But this meant that we had now drifted even further away from our path to the island.

We were now 13 and we had to take turns in the sloop and in the water, holding on to a rope and swim along or else the current would drag you away. We were at the point where the aviation training teaches you about the ELT (Emergency Location Transmitter) and the survival kit, how to build a tent in the dinghy, how to get rescued by search and rescue teams. But all we had was this tiny open sloop. It did not protect us from the fierce sun and we could only dream of a rescue bag. The sky became dark, although bright and even beautiful with falling stars. But we were hoping for a boat or plane. The endless, pitch dark sea showed few lights, possibly hundreds of kilometres away.

My mind was in overdrive thinking how I could keep the lead, when there were constant fights over who was entitled to stay in the boat. The crew did not want to paddle, but rest. But we tourists had worked very hard to try to reach the island. What could I do to improve our situation and to keep morale high? I had no answer, no one did.

‘We were thirsty – not hungry’

That evening, we slowly stopped paddling, it was not much use as the current swept us from left to right. It seemed two oceans collided, just where we were. Later I learnt that even modern ships disappear there, in giant whirlpools.

We were exhausted and extremely thirsty, because we had swallowed so much salt water. Strangely enough we weren’t hungry, although most of us had not eaten for over 30 hours now due to seasickness before disaster struck.

It was in that second night that we all had time to contemplate, thinking of the past and hoping for a future. I did that together with my girlfriend. Those dark thoughts, and tears for the fear of never seeing my family and friends again were regularly interrupted by high waves, coughing up salt water, having to swim hard to keep close to the sloop and then the thinking continued and the doubts. What else can we do? Where did it go wrong in management, what can I expect from this clearly not-trained crew? What may I expect from my fellow travellers? Nobody asked to be in this position. And I was the only one who at least had some kind of training, and that was focused on being in the air, not on water. Again, I had no answer. No one did.

Hours went by and we cheered at the first rays of sunlight. Although the water was about 24 degrees celsius, we suffered from hypothermia, shivering from lack of energy and food and drinks.

When I could see no more sparks in the eyes of a fellow tourist, I got scared and wondered: Who will die first? But I also realised that I must look as bad as she did, why would I not be the first to perish? What would you do with a body? What impact does that have on the group?

The volcano was nowhere in sight anymore and we aimed for another island. The captain, who had been in shock all this time, came out of it and started to give orders to his crew. There was finally some positivity in and around the sloop. We got warmer, the sun brought us new hope for survival.

But still, there was no sight of any rescue. Hours later, the good vibe turned bad again. Arguments broke out, threats were made and the sun literally burned through your body. Still no ships, it was a national holiday and a Sunday. The sky was turning orange, and soon would turn black again. How could we survive another cold night at open sea?

Then, around 5 p.m. two rudimentary fishing vessels appeared on the horizon and they kept getting closer. “Yes! We are rescued” we shouted, screamed, cried and yelled. We watched as the boats drew nearer and nearer and finally pulled us out of the water and on board to safety.

Hours later we arrived in the small village of Sape, Sumbawa. Research found out that we had drifted a 100 km away from the wreck, that sunk in front of the volcanic island of Sangeang.

Forty hours we had spent in the water, 48 hours after the boat sank, we were finally on land. 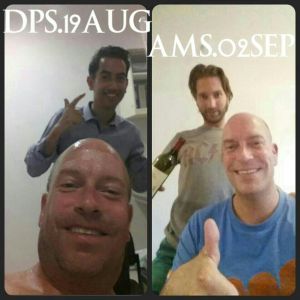 After three visits to local hospitals my girlfriend and I were flying home, where we had to recover for another two months before getting back to work. I started with swimming in hotel pools the size of a stamp, later in sea, I visited psychologists and went back to Indonesia. Also I recorded a film about for KLM for all the cabin staff to learn from it during recurrent training. And I wrote a book about our ordeal.

I still fly the world, take boat trips and make every day count. But I am more weary of what means of transportation I choose, as I had taken boats like these many times on holiday and en route.

I wish you all safe travels!

As a blogger for KLM, I wrote this blog: How I Survived a Shipwreck.

As an author I wrote the book ‘Schipbreuk in het paradijs’, or ‘Shipwrecked in paradise’ (only available in Dutch) Here.

About Confessions of a Trolley Dolly (86 Articles)

confessionsofatrolleydolly.com brought to you by International Gay Trolley Dolly, Dan Air ! Come & join us onboard as we take a peek behind the galley curtain with all your cabin crew & aviation news, galley gossip, glamour & humerous tales of life at 39,000 feet!

© confessionsofatrolleydolly.com by Dan Air Create a free website or blog at WordPress.com.